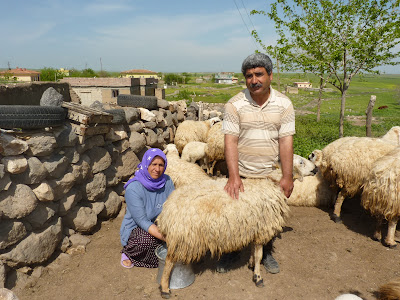 Our hosts, Pero and Halil Salva
A homestay in a rural village wasn't on the itinerary when we started planning our trip to Southeastern Turkey. Then I found Nomad Tours while doing some Web research, and got in touch with the founder, Alison Tanik, a British woman married to a Kurdish man.  She and her husband, Omer, had moved from Istanbul to his home in Yuvacali, a village in rural Turkish Kurdistan, when Alison began looking for a project that might help improve the lives of the 1,000 or so residents. Only 50 percent can read or write. Nearly 80 percent marry first cousins, so there is a high rate of birth defects. No sewage. No garbage collection. No high school. No Internet.
When Intrepid Tours, an Australian tour company, contacted her to ask if she knew about any homestays in the area, she suggested Yuvacali, and Nomad Tours was born. Omer's sister, Pero Salva, above, and her husband, Halil, were the first hosts, and our hosts for an overnight visit.
Virtually everyone marries within the village (There are only three last names), and they too are first cousins. Pero, 45 and Halil,46, have three (healthy) children: Faruk, 18; Fatih, 17; and Aylin, 10. Neither Pero or Halil read or write, but so their children's education is important to them. Virtually all the money they earn from the homestays is going towards that goal. Faruk hopes to enter college next year, and Fatih goes to a high school that's about a three-mile walk from the village.
Their house is two rooms - one used by the family for living, watching TV, eating and sleeping, and the other for homestay guests. There's also a small kitchen. The toilet is an outhouse, and running water comes from a tap connected to tank on the roof filled by a well. 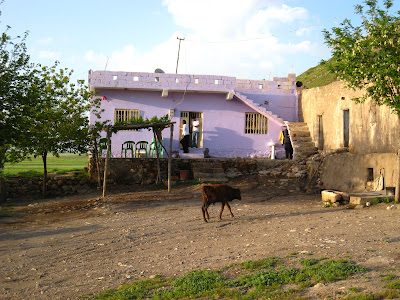 The mud building on the right is used for storage and animals. Around the corner is an open hearth where Pero does all the cooking over an open fire. Like most families, the Salvas farm, mainly cotton, barley, lentils and peppers. Pero also makes and sells cheese. She says she loves doing the homestays because it means she no longer has to pick cotton, and can work indoors. 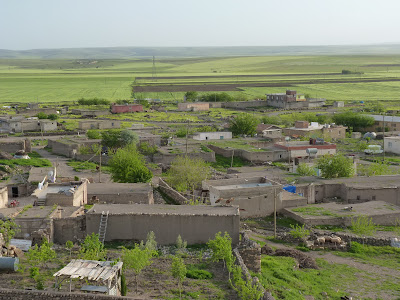 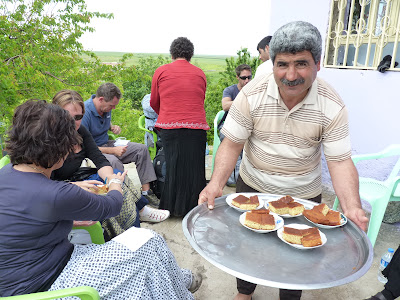 Halil serving cake and tea
We expected to be alone, but as it turned out, our stay coincided with that of a  Intrepid tour group. It was more fun than it would have been being there by ourselves, and we have Bridget, an enthusiastic Ameican volunteer anthropologist to thank for coming along as a translator. Communication would have been difficult otherwise. Pero and Halil speak Turkish and Kurdish, but only a few words of English. The kids, though, are learning, and the plan is for Fatih to take over soon as the official host.
There were nine of us, so I wondered where we would all sleep, but people here are used to making due in tight quarters. 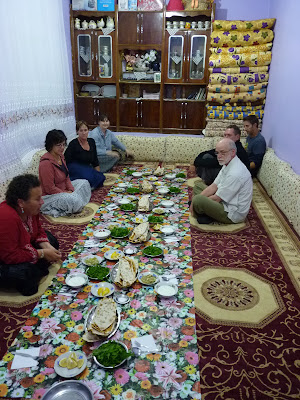 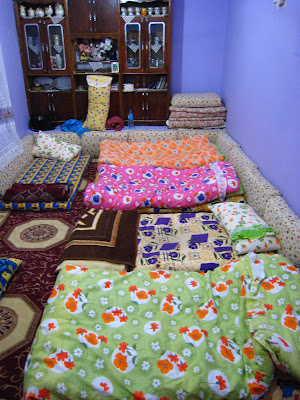 Nine of us ended up sharing the two rooms, and the family spent the night in an annex off the mud building. We all ate dinner on the floor in the living area, above, which the family then converted into a bedroom by pulling down the stacks of bedding piled in the corner (cotton mattresses stuffed with sheep's wool). We slept slumber-party style, men in one room, women in the other. In the summer, when the temps can reach 100 degrees or higher, everyone sleeps on the roof! 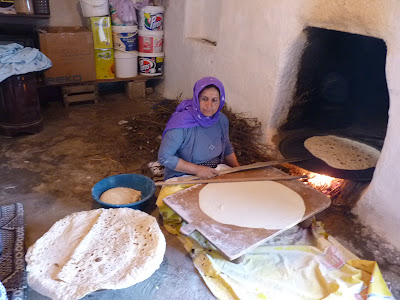 
Men and women divide chores along traditional lines, and then some. Men never do dishes, for instance, nor milk sheep or cows or bake bread. They tend to chores that involve leaving the village, such as shopping, and tasks such as shearing sheep, holding down the sheep while they are being milked, and killing animals. Halil raises bees and the family makes its own honey. 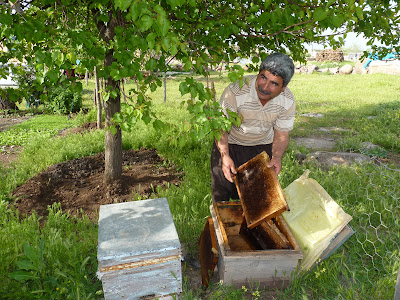 Pero works incredibly hard. Everything we ate- from the fresh yogurt and cheese to the roasted eggplant and soup made of lentils and spices - was produced on the farm and prepared by her.
Before most people are awake, Pero has already baked a day's worth of bread from scratch over the fire, milked the cows and swept the front yard with a broom made of twigs. A few of the women in the group tried our hand at making bread, but we were no match for Pero's speed. As you can see from the picture, she had three steps going at once. The finished bread is at left. Center, she kneads the dough into the size of a large pizza. Right, she watches as the bread bakes in the open oven. 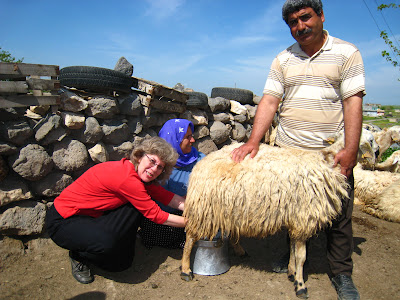 We also tried our hands at milking sheep. Not good! The milk barely trickled out. Notice the skirt. All women wear long skirts, and we were instructed beforehand to bring one - no exceptions. Pero favors a lavender headscarf, the current fashion with women in this area of Southeastern Turkey. 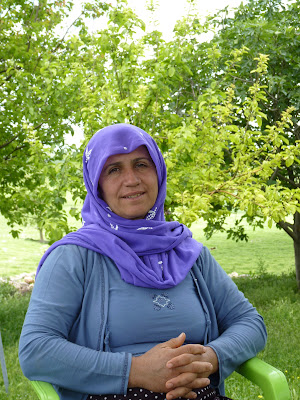 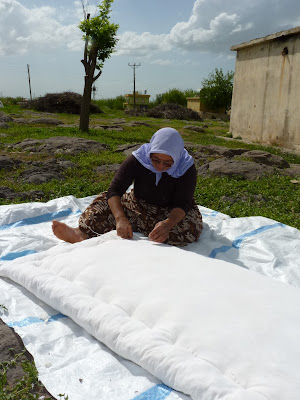 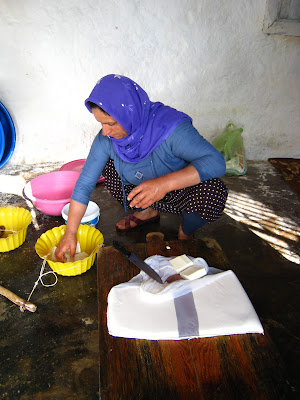 Nomad Tours' Yuvacali project is small. So far, there are just two host families, but it's had many good side effects in terms of bringing a bit of the outside world to the villagers. With funds from donations, Nomad has raised money to buy supplies for the school. The government provides a teacher, but little else. It also asks guests to bring toothbrushes or tootpaste to donate for a dental hygiene project. When Alison and Omer moved to the village, they found that hardly anyone brushed their teeth. 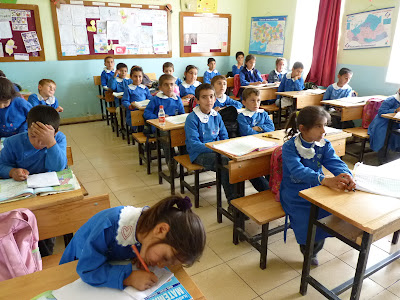 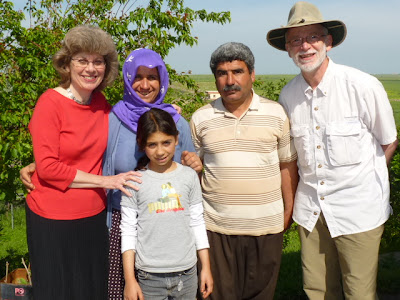 Family portrait
The Kurdish started out in Turkey as mountain Nomads, and many families still live this way, traveling with their sheep most of the year to different locations as the weather changes, and grazing improves in the lower elevations. The morning we left the village, we went by car with Bridget and Omer's brother, Mehmet, to find and talk with some nomads. 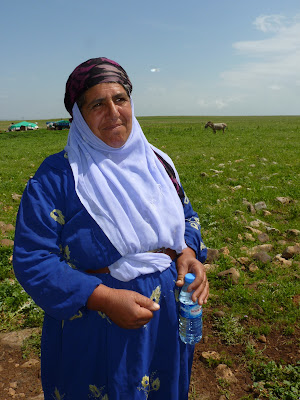 This woman greeted us near the tents where her family had set up camp. Typically the same families return to the same areas year after year, and either lease land, or if it belongs to a village rather than an individual, ask the neighbors' permission to use it. 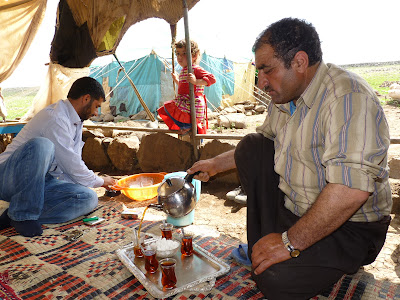 This family travels about nine months a year, spending just two-three months in the village where they have a real home. Above is Ali, 50, the father of 10 children, all of whom he and his wife bring with them when they're on the road. With 200 sheep and three tents set up - one for sleeping, one for cheese-making and the carpeted one above for eating or entertaining guests, the family is considered well-off by nomad standards.
Baby chicks darted in and out of the tent as Ali offered us glass after glass of tea, then glass after glass of Ayran, the yogurt drink made with water and salt. The family packs everything up and moves every two or three months. To get here from their home village, they  walked for four days,  traveling in a caravan of sorts, with the younger children likely riding on a tractor. 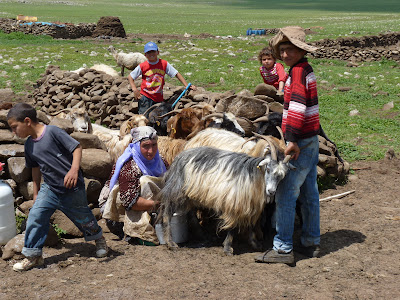 A nomad's wealth is measured by the number of sheep he owns. Ali's flock of about 200 takes his wife and one of his daughters two hours to milk twice each day. From now on I'll think twice before I complain about having to much too do around the house!
Next: Gaziantep: Southeast Turkey's culinary capital
Posted by Carol Pucci at 9:03 AM