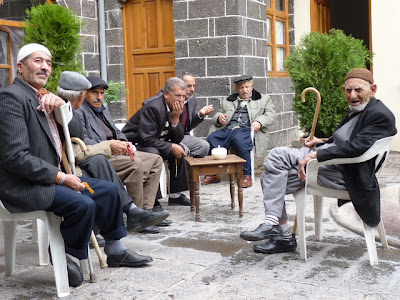 Hello from Diyarbakir, a 5,000-year old city in Southeastern Turkey. We're 200 miles from the Iraq border and about 100 miles from Syria, in upper Mesopotamia. Diyarbakir is considered the unofficial capital of Kurdistan. Most of the people here are ethnic Kurds and Sunni Muslim. They speak Kurdish, and many keep to their own style of traditional dress. We look as "foreign'' as we might in China or India, yet I can't think of a place where we've met and taked with so many people in so short of time.
The Kurds in Diyarbakir are among the friendliest anywhere, and despite the language barrier (I know only how to say "Thank you'' in Kurdish), we've somehow been able to communicate.
The men in the above photo welcomed us into their courtyard for tea. They gather here most afternoons to sing traditional Kurdish songs, but one member of their group had died the day before, so they weren't singing on the day we visited. They invited us to sit down and chat anyway. One said he knew how to say only "yes'' and "no'' in English. So I asked him if I could take their picture...yes or no? "Yes!'' he said, and we all had a good laugh. "Obama'' is another word everyone knows. Mention of his name always gets a thumbs up. 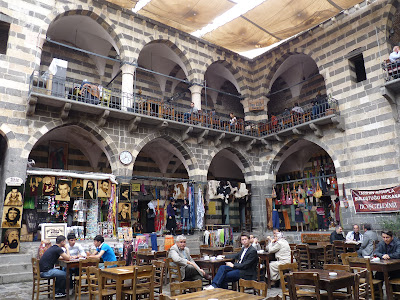 Hassan Pasa Hani
We're spending most of our time in Diyarbakir's old city, a busy area enclosed in three miles of high black walls, built by the Romans, from black volcanic rock called basalt. Cobblestone streets lead to old homes and former inns hidden behind stone walls decorated with white stripes, a trademark architectural characteristic.
Above is the Hassan Pasa Hani, built in the 16th century as an inn for traders and their camels, now a spiffed up collection of coffee houses, tea gardens and shops. Diyarbakir was once home to a large Christian population of Armenians and Syrian Orthodox, and the city has several historical churches as well as a collection of 500-year-old mosques. We rang the doorbell to the Syrian church, and the priest answered and showed us around. 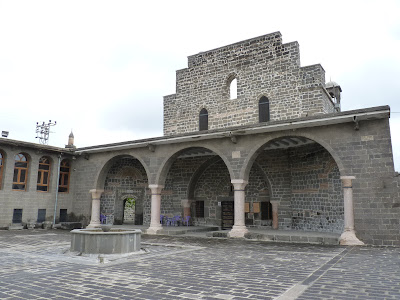 There are only 30 members left in this congregation, so the church is locked most of the time. It dates to the 1st century, and has been beautifully restored. Members still chant and do readings in Aramaic, the language of Jesus.


The mosque below was built in 1572. Anyone can go  in, but removing shoes and putting on a scarf (for women) is mandatory, so I carry one with me in my shoulder bag. 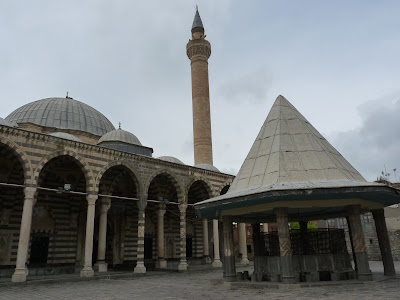 Looking around in the Hassan Pasa, watching all the families and young couples, shopping and relaxing over tea, it would be easy to get the wrong impression that Diyarbakir is upscale. Far from it. Most of it has a run-down feel, and given cultural differences, it might mistakenly be perceived as dangerous.The city absorbed large numbers of poor villagers in the 1980s and '90s who fled fighting between Kurdish militants and Turkish security forces. Unemployment is high, but apart from a few packs of very annoying 8-10-year-old boys shouting "money, money'' at us, we've encountered nothing but curious and friendly locals. They're used to Turkish and European tour groups coming through in summer, but I get the impression that they see few independent travelers, and few  Americans. 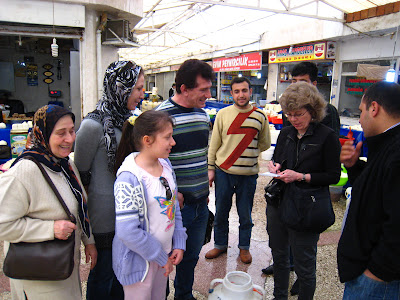 We met this family in the yogurt and cheese bazaar, and enclosed market filled with individual stalls selling various types of white, mostly sheep's cheese, some of it twisted like a braid. The young girl on the left spoke a little English. She translated as I talked with her mother, father, grandmother, and the cheesemaker below who proudly cut us some free samples. 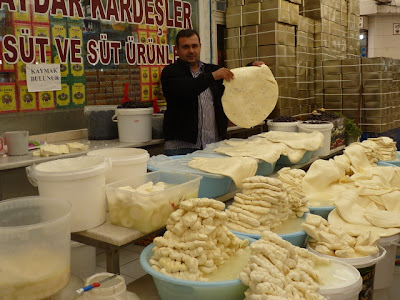 More new friends
These two women, a denist on the left, and a law professor on the right, stopped to talk to us, and ended up showing us around town for about two hours. When I asked them for a restaurant recommendaton, they led us down a little lane to the Cafe Izgara inside what was once a Jewish home. Tom and I went back later that night. We sat under a ceiling carved with the Star of David, and ate our best meal so far- kababs, tomato salad, bread, tea, a frothy yogurt drink called ayran and boiled sweets with honey- all for about $18 for two, tip included. Diyarbakir's speciality is sheep liver kababs. We reluctantly tried a skewer, then went back the next night for more. 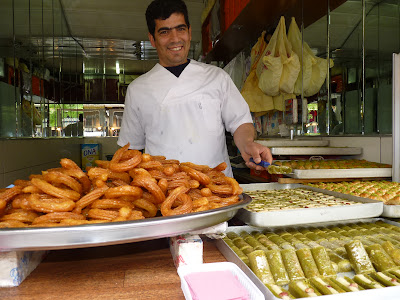 This region of Turkey is famous for sweets made with honey, nuts and milk. All along the main street in the old city are little shops making and selling baklava, kadayif and halva. This is the brother of the owner of the Cafe Izgara. 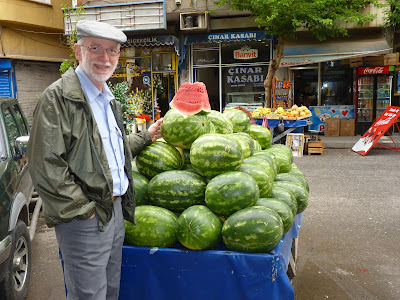 Diyarbakir's other speciality is watermelon. Thes are not local because its out of season. Local melons are much bigger, the result of planting on the fertile banks of the Tigris river using a method of filling huge holes with sheep and goat droppings for size, and pigeon manure for flavor. 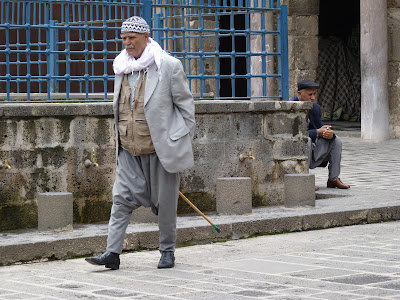 Many older men wear baggy, Arab-style pants, tight in the legs and loose in the hips and crotch. Most younger men wear jeans and t-shirts. Younger women wear fashionable head scarfs and long coats or tunics over jeans. Many don't cover at all. Western women and other foreigners are free to wear whatever they want. Tom's wide-brimmed hat attracts attention. A few have asked if he's from Texas.
Next stop: Sanliurfa: Birthplace of the prophet Abraham
Posted by Carol Pucci at 10:06 PM