Sanliurfa: Land of Prophets and Kings 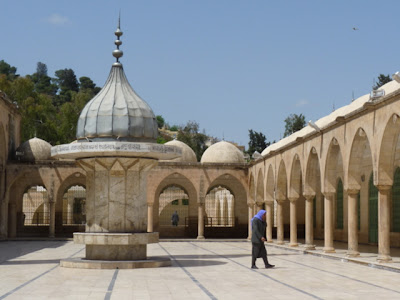 It's been a while since we've had Internet access, so there's a lot to catch up on. Sanliurfa (Urfa) is a lovely town of about 400,000 near the Euphrates river.The outskirts are settled by Kurdish, but it's mostly Turkmen and Arab Turks in the city center, and there's a distinct Arabic feel, with many men wearing flowing red and white checked turbans, and women (and some men) in traditional violet or purple head scarves  decorated with delicate white flowers. 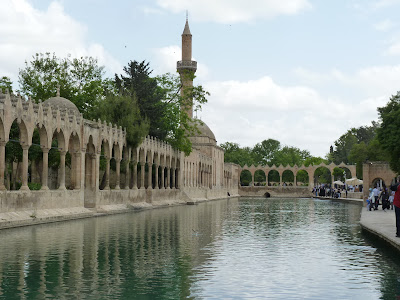 Fish Lake
The town is a major center of religion and an important pilgrimage site for Muslims, and even some Christians. Legend has it that Abraham, the prophet, was born in a cave here. According to the story, the king ordered him burned to death for refusing to worship pagan gods. But God turned the fire into water and the burning coals into fish. Abraham was hurled from a hill, but landed safely in a bed of roses. The whole scene is recreated in a peaceful, park-like area on the edge of town. The lake above is filled with well-fed carp. It's considered good luck to feed the fish, but try and catch a fish, and you'll risk going blind, or so the legend goes. 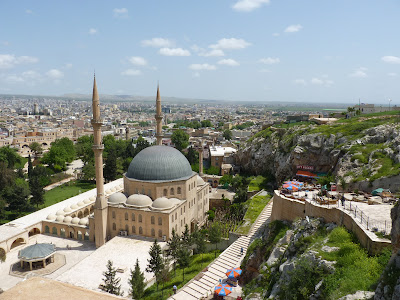 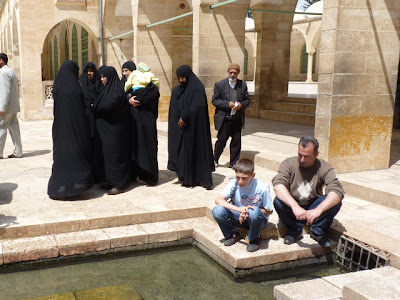 I was struck by this scene outside the mosque that leads up to the cave. The women in black are likely part of a tour group from Syria or Iran. The women of Urfa dress more colorfully, usually in robes that sparkle with sequins. 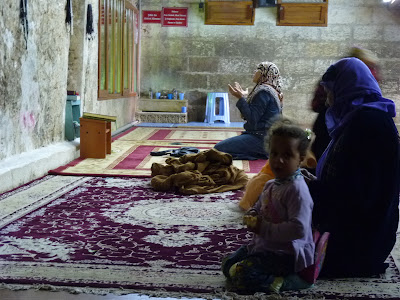 Women enter the cave on one side, men on the other. These women were praying, and a few were very emotional. Tom said nothing like this was going on on the men's side.


By now you can tell this is not the Turkey you will read about in Travel & Leisure, and that's a good thing for us, but I expect it will change as more people look for new parts of the world to explore. For now, at least, American travelers are rare. We've met none so far, although we have met several Australians and Europeans. 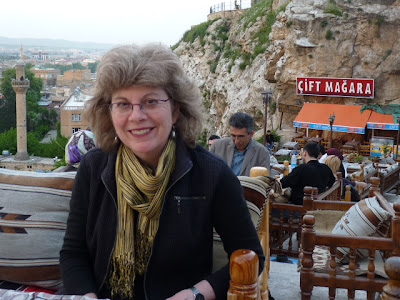 Just as it was in Diyarbakir, everyone is friendly and wants to talk. People make eye contact, say hello, ask us where we are from, and in 99.9 percent of all the cases, want nothing more than to practice their English, or just find out how we like their city. Anyone who's been to Morocco or Egypt, or even the touristy parts of Istanbul will find being in this part of Turkey refreshing. There are no touts, and even in the bazaars, there's no pressure to buy. No one who offers help ever expects a tip. There's been very little talk about Bin Laden. It wasn't as big a story here as it apparently was in the U.S., and as you can tell, we feel welcome and safe.

Like many of the cities in this area, Urfa was once an important trading center with Iran and Syria and a junction on the Silk Road. Its bazaar dates to the 16th century. A walk through the little streets wakes up all the senses. Bread baking. Skewers of lamb roasting on outdoor grills. Copper-smiths pounding away in little stalls. Tea vendors scurrying about. 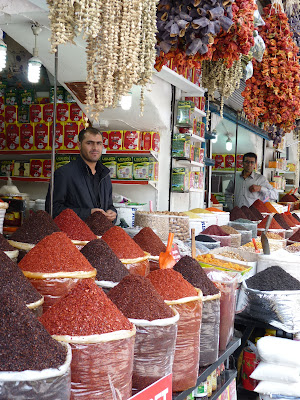 Especially proud are the vendors with closet-sized storefronts devoted to making baklava, or our favorite, peynirli kadayif, a delicate pastry made with shredded wheat and cheese, butter, honey and pistachios. We were invited into a shop one night to see how it's made. Actually, the waiter was trying to flirt with a German woman we were with. When she wouldn't give him her Facebook info, he tried to lure her in with a cooking lesson. 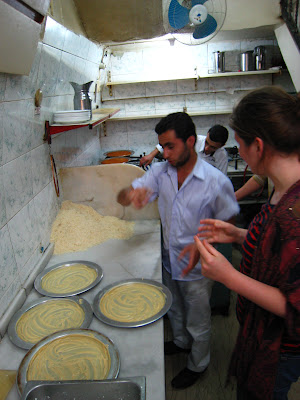 We've become regulars at the shop below that does a “sandwich'' of sheep's milk ricotta and honey in a fresh, sesame seed bun. Good thing we've been walking 6-8 miles per day, according to Tom's pedometer. One way little boys try to make money is to walk around the streets carrying scales and offering to weigh people. They don't get many takers among the tourists! 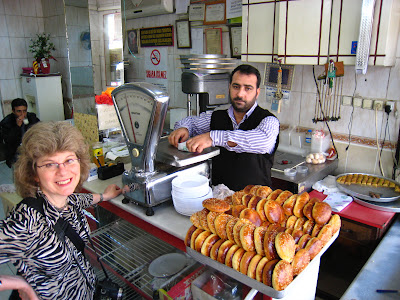 Simit sellers are everywhere. Simits are rings made of bread dough topped with sesame seeds. Turks like to eat them as a late afternoon or evening snack which makes for a perfect after-school job. This boy was just learning the crucial skill of balancing a tray on his head. 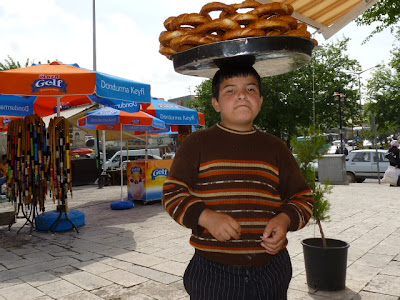 Bread is serious business. The bakeries open early, with bakers working in teams to mix the dough, and shove it into wood-fired ovens while a clerk stands at an open window waiting on customers. We spotted this bakery on a side-trip we took to the town of Mardin. A truck had just dumped off a load of firewood for the oven. This is a busy road, full of cars and trucks, and the wood was taking up valuable parking space. 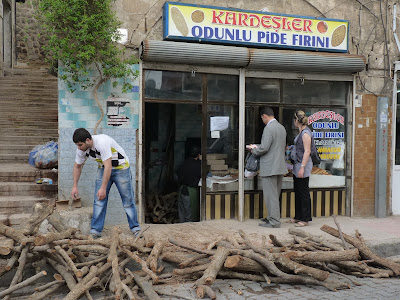 With the exception of a few plane rides, we've been getting around mainly by bus. Several companies compete on the same routes, setting a high bar for service, so this is nothing like riding Greyhound. Seats have individual TV screens and head phones. Attendants in bow ties bring around squirts of cologne and mints, followed by coffee,  tea and soft drinks. 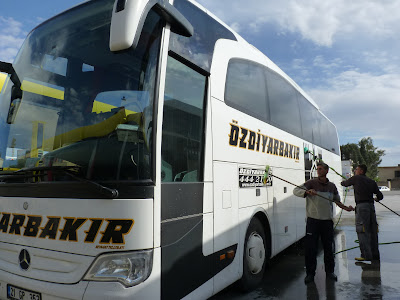 On trips of three hours or more, there's usually a rest stop.Everyone gets off the bus to get a snack or use the restroom so workers can wash the bus. We must look like space aliens because people are constantly looking out for us. Tea seems to appear out of nowhere while we're waiting for the bus to come. Never have we been asked to pay. On one bus, I sat next to a man who overheard me speaking English. He immediately called his son on his cell phone. The son spoke English, and the man thought I might like to talk to him. I had no idea what to say, but we chatted about where I had been,how I liked Turkey and how he liked the U.S.
Another bus adventure ended in us meeting this silversmith in Mardin. 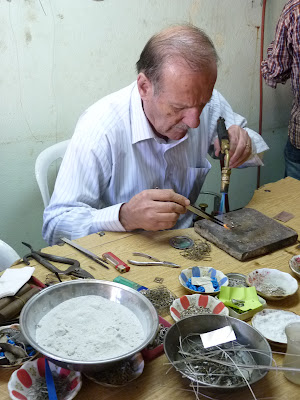 Copper, silver and metalwork have a long history in this area, and this man is one of the city's top jewelers, specializing in filigree. We visited his workshop after he stopped us on the street to ask if we needed help.We did. We had taken the bus there from Urfa for the day, expecting to buy a return ticket once we got there. But as sometimes happens, the bus dropped us off at a street corner instead of a station, so we had no idea what to do. The man didn't speak enough English to be off much help, but he led us to his son who did. The son took us to the bus agency office to buy a ticket. Later when we stopped by his shop to say thanks, he invited us in for a chat and sample of his homemade Syrian wine. While Southeastern Turkey is mainly Sunni Muslim, there is a small population of Syrian Orthodox Christians many of whom live in Mardin. 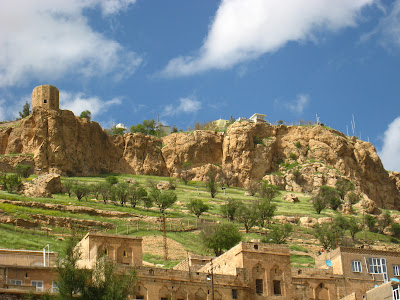 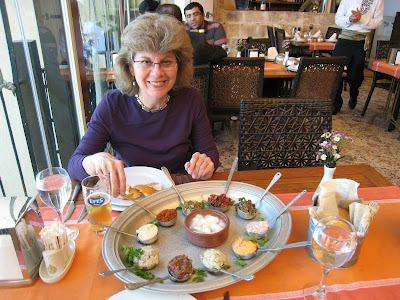 Before catching our bus back to Urfa, we had an early dinner at a wonderful restaurant opened a few years ago by a local woman. She wanted to showcase the local specialties made by Mardin women, but it was difficult convincing their husbands that they should be allowed to work outside the home. She managed, however, and today the restaurant is thriving. We shared a mezes (appetizer) plate, above, with 10 different spreads and dips. I think it might have been the first beer we had in this area. Turkey is a secular country, but it's also Muslim, so to discourage drinking without outright making it illegal, the government taxes it heavily. Most restaurants in the Southeast aren't licensed, so serve only tea, soft drinks and ayran, the yogurt drink.


Urfa has more than 200 historic stone houses and mansions, most tucked away on narrow backstreets not wide enough for cars. The houses are huge- too big for families and too expensive for anyone to maintain, so a few have been turned into museums, restaurants and hotels, either with private or government restoration funds. We've been staying at the Aslan Guesthouse below. 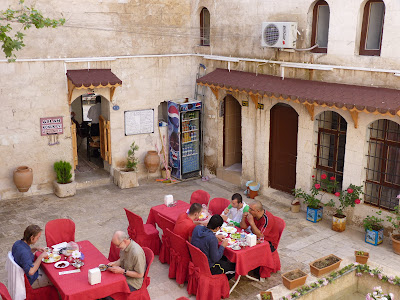 The house was the owner's grandfather's home. We had one of the best rooms, with bedroom, private bath and a large Turkish-style sitting room "furnished'' with a carpet and cushions piled along four walls. I felt sorry for the backpackers using the Aslan's "dorm room'' an upstairs room lined with 20 or so sleeping cushions. The room was comfortable enough, but there was only one shower to share.
Staying in these old places sounds romantic, but there are definitely downsides. One evening (without warning) all of us staying in the guesthouse came home to find a huge party going on. The owners were hosting "Traditional Night'' for a tour group from Istanbul. The entertainment was blaring Kurdish music that went on until 11 p.m. 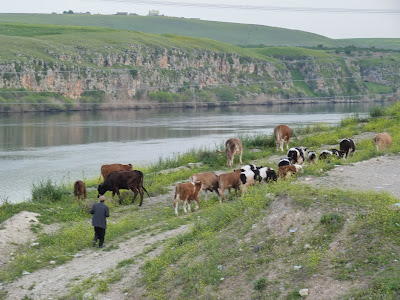 Euphrates River
A highlight of our time in Urfa was a day trip into the mountainous countryside to Mount Nemrut National Park to see these 2,000-year-old stone statues perched on the summit at about 8,000 feet. 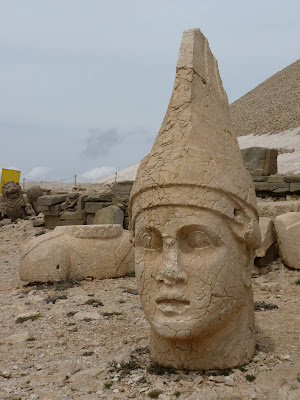 The heads are about six feet tall, and were discovered by a German engineer in the late 1800s. A pre-Roman local king with a short-lived empire built the statues to himself and the gods. Visitors willing to make a 20-minute climb to the top can see the heads, toppled down by earthquakes and set up again on the hill, along with the bodies sitting above them. 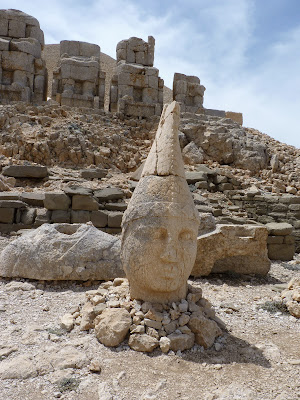 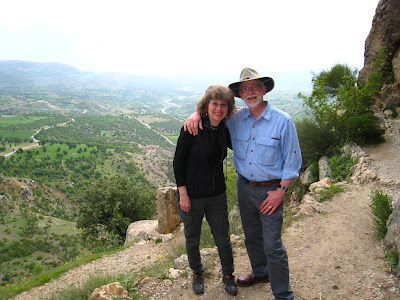 Half the fun of getting here was going with Yusuf, 63, our guide and driver. The trip is impossible by public transport, and long and expensive by car, so we found two women in our hotel willing to share the cost. Yusuf makes the trip from Urfa (a four-hour drive each way) almost everyday, so to keep things interesting, he entertains his customers, and I suspect, himself, by singing Kurdish folk songs in the car, and coming up with nicknames for everyone so he can keep who's who straight. 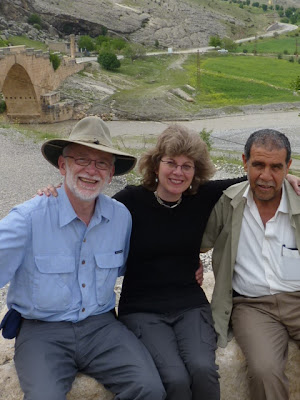 Yusfuf and his "uncle'' and "sister''
Tom became his "uncle,'' as in "Uncle, do you see any traffic coming this way?'' I was his "sister.'' The other two women, in their 20s, were his "nieces.'' He was a great tour guide. He took us to his "nephew's'' place for a lunch of Turkish pizza, olives, tomatoes, cucumbers and cheese, and did a good job of explaining how pistachio trees cross-pollinate, stopping the car to show us the difference between "man'' trees and "woman'' trees. There was lots to see along the way. Behind us in this picture is a Roman bridge built in the 2nd century AD.
Next: A Village Homestay
Posted by Carol Pucci at 11:13 PM