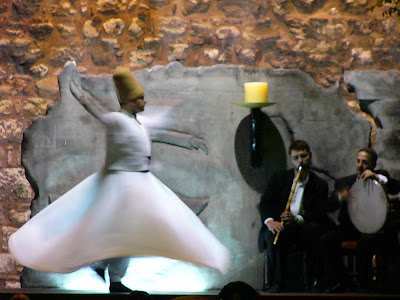 Turkey is our choice for this year's spring adventure. In past trips we covered what we think are the most interesting parts of the country - Istanbul, of course, Cappadocia and the Mediterranean coastal towns. This time, after a couple of nights in Istanbul at our favorite budget hotel, the Side Hotel in Sultanahmet, we'll spend time exploring the mainly Kurdish towns in Southeastern Turkey along the Syrian border, then end the trip in Izmir and Selcuk on the Aegean coast to see the Greek and Roman ruins at Ephesus.
I don't know anyone who has been to Turkey and doesn't want to go back. I was looking through an old guidebook, and out fell a clipping of a story I did on our first trip to Istanbul 10 years ago. The city was so fascinating, and so cheap, I wondered why it wasn't on the radar of more American travelers. That's changed of course. Americans have discovered Turkey. Rooms at the Side, which I wrote about 10 years ago, were $35 a night then. They're $100 now, but still good value, considering the location across from the Four Seasons and a few steps from the Blue Mosque.
The Turkish culture, food and people are drawing us back. In looking for new areas to explore beyond the beaches and usual tourist areas, we had in mind somewhere with a little edge, a place just hard enough to get to (not really, trains, buses and planes go everywhere) to make the journey interesting. We settled on the towns in upper Mesopotamia, the area between the Tigris and Euphrates rivers where Western civilization got its start.
We'll fly from Istanbul to Diyarbakir, the unofficial capital of Kurdistan, which includes parts of Syria,Turkey, Iran and Iraq. Diyarbakir is known for its Roman-built city walls made of black basalt stone left from a volcanic eruption. With a 5,000-year history, it's one of the world's oldest cities. It has a long history of various cultures and religions, and distinctive Armenian, Christian, Kurdish and Arab quarters. It's also known for growing giant watermelons!
Although not officially recognized by the government as a minority group, the Kurdish are Turkey's largest ethnic minority. They were originally nomadic mountain people, with their own language and cultural traditions, much of which was officially surpressed after Turkey became a republic in 1923. An on-going fight for their civil rights and representation in the Turkish government has heated up with the approach of national elections in June. There were protests in Istanbul and Diyarbakir recently, but so far, the situation seems to have settled down. It should be an interesting time to be there.
For those who have expressed concern considering what's going on in Syria right now, this is Turkey, an entirely different country with a political system many in the Arab countries view as a model for the 21st century. Turkey is a predominantly Islamic country with a secular, democratic government - not perfect for sure - but stable and without any major problems.
We plan a one-night home stay with a village family arranged by Nomad Tours.  Halil and Pero and their three children will be our hosts, along with their seven cows, 12 sheep, 20 chickens and three turkeys. One requirement in the village, more out of modesty than any religious significance: Women MUST wear a long skirt...So, after all these years, I'll finally have a use for one of the three crinkle-type hippie skirts I still have from the '60s. Maybe I'll donate it once we leave.
We'll also visit Sanliurfa, about three hours by bus from Diyarbakir. A few miles away in the town of Göbekli Tepe (Turkish for "Potbelly Hill'') German and Turkish archeologists are excavating a site where they believe they have uncovered a temple that's about 12,000 years old, twice as old as the Egyptian pyramids.
We're staying at the 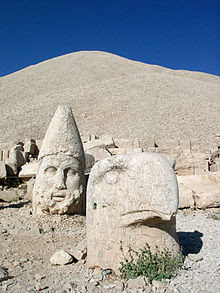 Sanliurfa is said to be the birthplace of Abraham, so Muslims consider it a sacred city and a pilgrimage site. One of the mosques has a pool filled with fish. Legend has it that the pool is at a site where King Nemrut (who built the statues above) wanted to burn Abraham as a sacrifice. God however intervened and turned the pyre into water and the coals into fish.
Our last stop in Southeastern Turkey before heading to the coast will be Gaziantep, another city with a rich history, and a reputation as one of Turkey's culinary capitals. It's known for its baklava, made with locally-grown pistachio nuts; its kebabs, especially ciğer (liver); its mosaics; and the coppersmiths' bazaar. 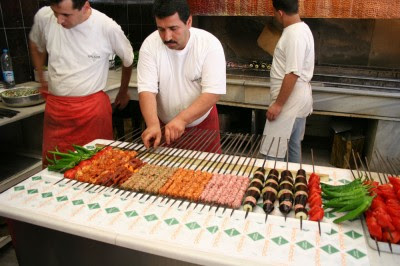 We're splurging on a room at Asude Konak, a restored Ottoman-era mansion built in the 1890s. The price is about $100 a night, pretty steep for this part of Turkey. We've booked all of our rooms ahead this time, with prices ranging from $100 in Istanbul and Gaziantep to $40 in Diyarbakir and Selcuk. All the rooms have a private bathroom and come with breakfast. The homestay is $144 for the two of us, which includes transportation to the village, all our meals with the family and a jaunt into the mountains the next day to meet and talk with nomads, assuming we can find them. They're nomads after all.
I'll be adding to this blog as we go along, assuming we find wi-fi. Hope you enjoy it!
Posted by Carol Pucci at 7:27 PM